'Fishing the Shoal, Hauraki Gulf, NZ' - LINK to Marine Series
​
​Kathy has sketched and painted all her life.  She achieved a life long ambition and studied at the Whitecliffe College of Art and Design later in life after bringing up a family and working in the nursing profession,
Focusing mainly on Marine and Narrative painting at that time, she exhibited in Auckland galleries, including Art by the Sea and Art of this World galleries in Devonport, and the Studio of Contemporary Art, Newmarket.  Other highlights of those years were sailing the Hauraki gulf with the family, working as a resident artist at Lake House Arts Centre in Takapuna and organising the Stars and Stripes gallery in Auckland's Viaduct Basin during the 2000 Americas Cup Regatta. 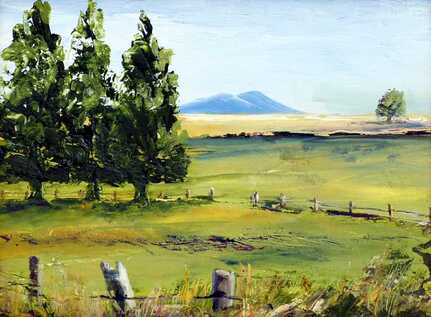 'Farmland near Te Awamutu with distant Mt Kakapuku' - LINK to Waikato Landscape
​Kathy moved to the Waikato, a rural area south of Auckland a decade ago, to watch Grandchildren grow up and share her studio with them!  She began a  series of paintings depicting the landscape, finding it a great way of becoming acclimatised.
​'​The wide open skies, the green pastures, trees - both native and exotic, mountains, rivers and lakes, together with isolated signs of habitation such as fence posts, farm houses with colourful gardens - and water tanks set high on a hill.
AND A HUGE SENSE OF SPACE AND FRESH AIR THAT MAKES IT ESSENTIALLY NEW ZEALAND.' 'Christmas Rose and Magnolia' - LINK to Waikato Gardens
​Waikato Gardens  are a joy to behold!  I love to wander round our large garden after a day in the studio to find a bloom just asking to be painted.  I then do a quick small palette knife painting to use up the paint on my palette before the big clean up for the day.
These smaller paintings evolve into bigger canvases such as 'When Shadows Lengthen'. ​Influences:
'The New Zealanders Toss Woolaston and James Nairn; the English artists J.M.W. Turner and John Constable; the Americans Edward Hopper and Winslow Homer and the Australian Heidelberg Group have all been a source of inspiration in landscape and marine work.
Wassily Kandinsky's work has always held a fascination for me with his wonderful use of colour and innovation'.